The exhibition Keltové brings us into a trip through the Celtic world in Central Europe, more specifically the role of Bohemia in its development. Following a chronological narrative, it goes back to the beginnings of this civilization, to answer fundamental questions such as its origin, its location and the first testimonies described by several historians. 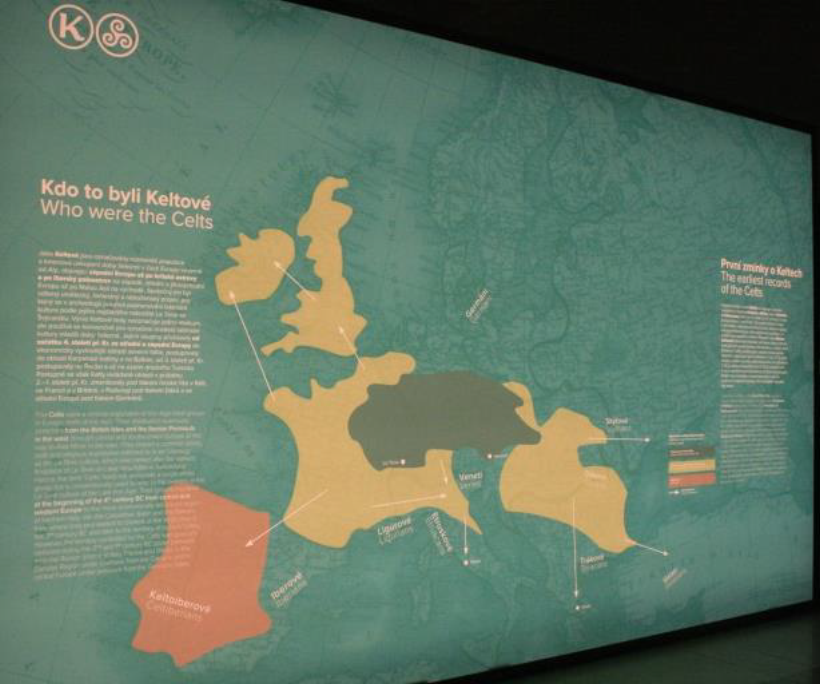 These testimonies give us an account of the physical, "people with white skin and light hair," and emotional aspects of these people "their corageous and emotional nature," "Their faith in the immortality of the soul." From the above reports one can already draw an impression about its predominantly spiritual character. Conventionally, the term "Celtic" is used to refer not to an ethnic group from the north of the Alps, but the "guardians" of what is called La Téne Culture of the late Iron Age.

The exhibition focuses primarily on aspects that stem from archaeological research related to the spiritual and material world of the ancestral ancestors of the Bohemian region. The narrative develops into two main nuclei: the first part is devoted to the spiritual and artistic world, where one can observe how the creation of the new material (iron) allowed people to begin to develop geometric art, and from there its increase in the decoration of the caves. The cemeteries were a precious instrument of social conscience because through burial rituals we can notice the difference between rich and poor could be noticed, by the ornaments used.

In this part we can see the Etruscan influence in La Téne Culture and how they were influenced by its iconography and consequently by its Hellenic past. Closer to the end of this course, we are presented with a facial reconstruction of what would be a Zavist man, this reconstruction was done through an archaeological (skull) find. Through the bones also fruit of the archaeological discoveries, one can perceive what was the physiognomy and the main diseases that affected them. 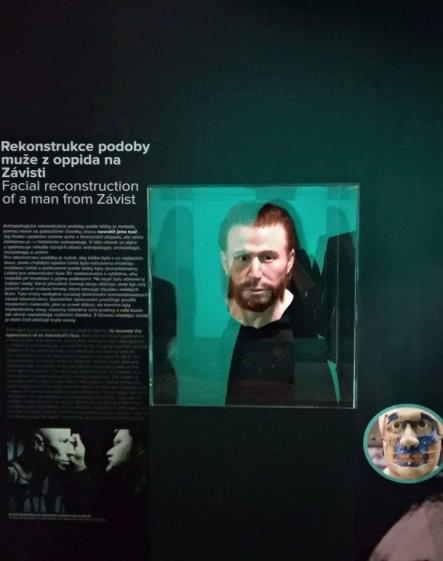 In the end, we have the part dedicated to women's and men's clothing, which allows us to make a preview here with the second part dedicated to everyday life, which is confirmed by the passage between the first room and the second, dedicated to the House and the domestic tasks, such as the production of textiles (and here we are introduced to the most intimate life of the population and consequently allowing a gradual introduction into the presented history).

Inside the space of the second room we have a virtual visit through a small screen, which makes in 3D the reconstruction of an acropolis and allows the visitor to have a perspective of the daily routines, to its main activities, such as the production of coins, pottery and work on the glass that is presented to us through a prototype installation of the workshops of these various branches.

The museographic process of the exhibition proposes the creation of a structured museological narrative, through a chronological bar at the entrance, which gives us pertinent and easily accessible information. Even before, a panel that places us at the beginning of the trip, containing important information so that the visitor can perceive the rest of the narrative.

The course outlined, although without apparent signaling, suggests that the course must be followed by the right. Although the visitor is free in his options, this route is a kind of subliminal suggestion. In psychological terms it can make the visitor feel more comfortable, since he feels the psychological "comfort" to know that he is being guided by something, since it is a "historical" exhibition and that implies having a path defined). The dark environment, using the colors black / green / red, as well as the placement of light (circumscribed to objects and texts) confers a theatrical atmosphere and allows the visitor a greater involvement in the visual atmosphere. This atmosphere, combined with the narrative that is presented to us, frees space for imaginary reconstructions. 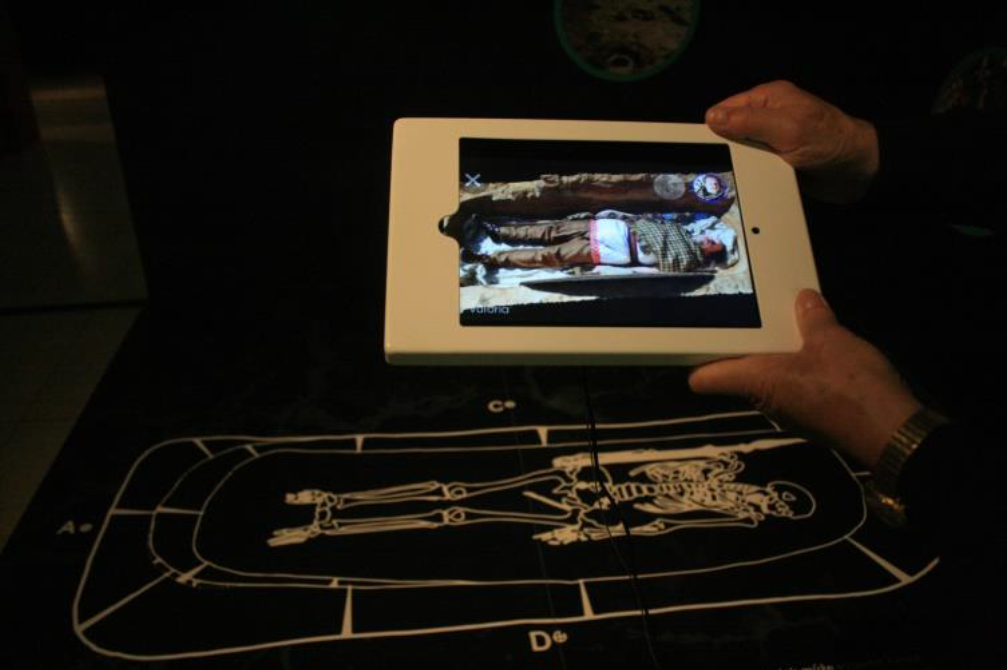 The use of interactive technologies allow the perception of the discourse produced as they dialogue with the audience and awaken it to visual, tactile and audible interaction. The 3D reconstruction allows you to have the perception of what the original tomb was like, as well as the person who was buried at the time. In the second room with another interactive feature the visitor is invited to "open the door with a celtic key from the opposite side". 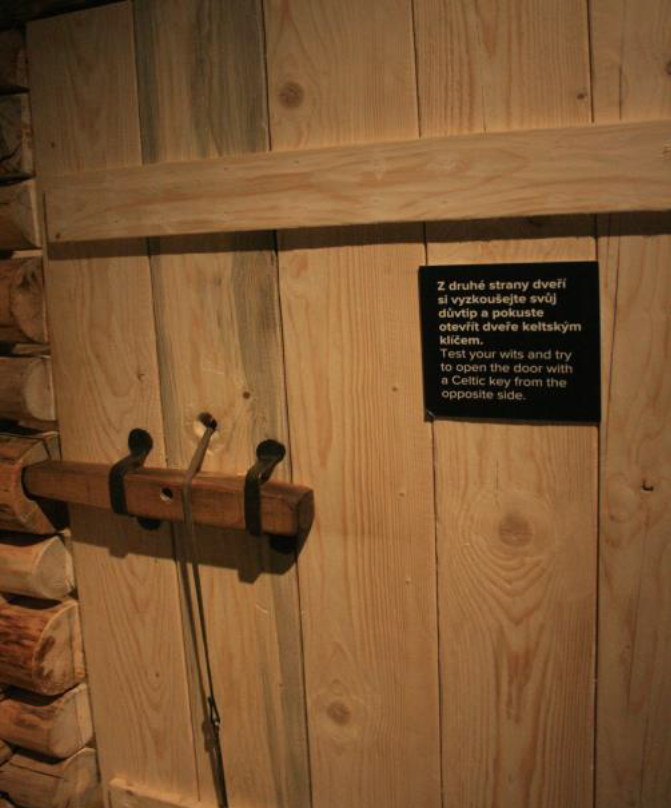 The texts on the wall, in general, have an accessible and easy to interpret language (with bilingual information). This is because there is concern to avoid too technical language. Even when there is this need, the solution is to open a small space next to the text where the meaning of the term is explained in a simple way. 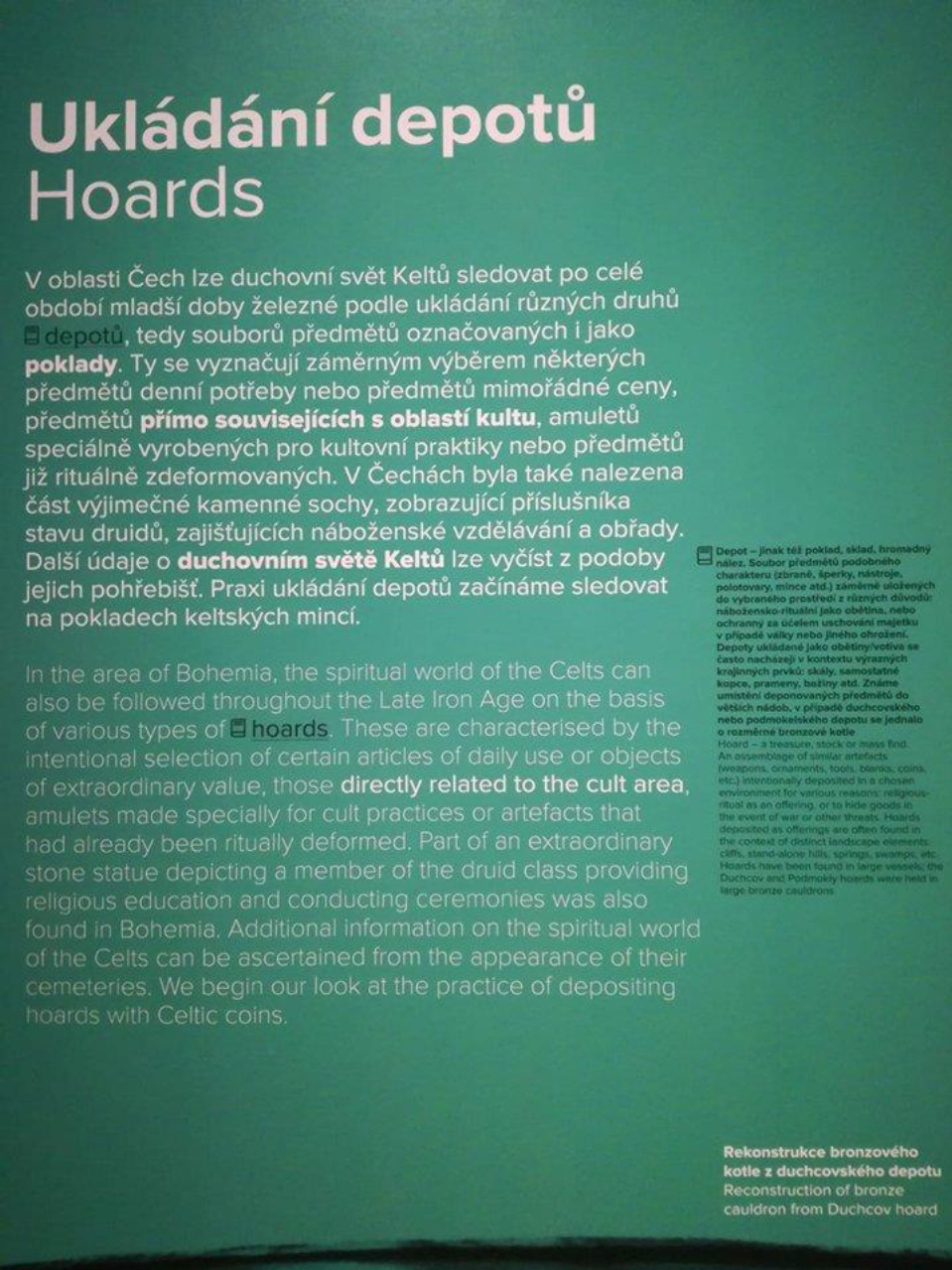 It may seem too obvious but it is an aspect of social integration important, which is not always respected in the exhibitions and here, I positively identify. Still related to the textual theme, QR codes are used facilitating a greater amount of information, avoiding long texts throughout the exhibition.

Often such long texts tend to become "boring," and these codes produce information structured on several levels, more, or less specialized. It is something positive since it functions as a mediator of communication and allows the visitor to act on what they want to know in a more autonomous way. 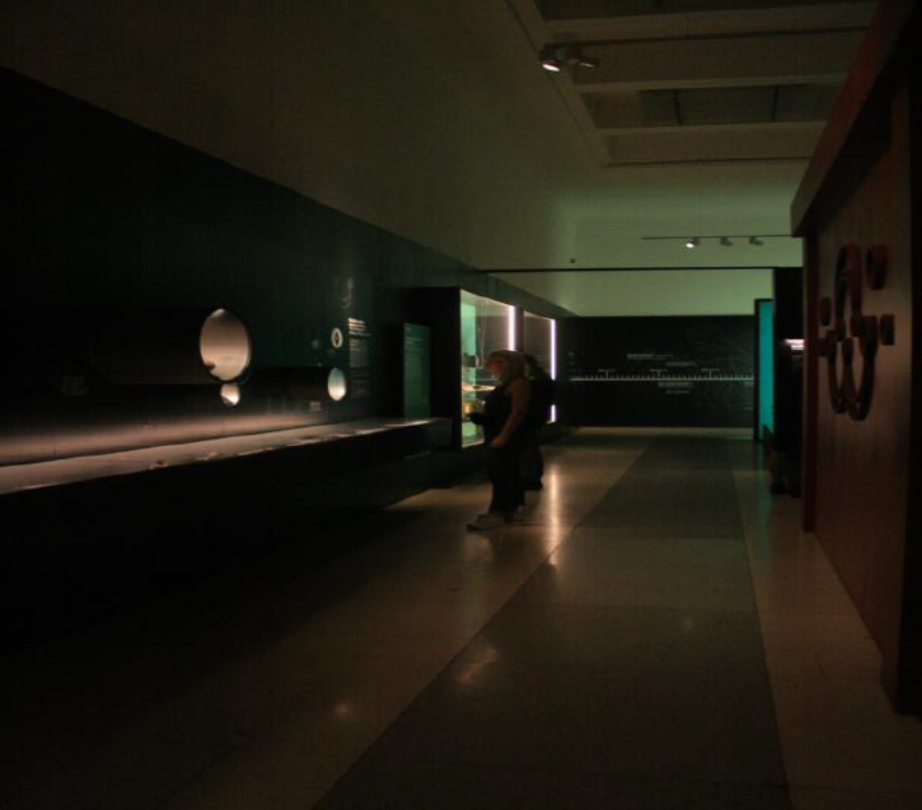 Another positive aspect that I would like to emphasize is the fact that all the elements seem to me to be interconnected in the discourse that is intended to be pass. In the middle of the exhibition there is a section devoted entirely to numismatics and its history within the community. I found it very curious that this course was designed in a circular way, having the shape of a coin, which made me think that it could be a kind of symbology inherent in the discourse. Also exemplary are the additional boxes of additional information in circular form. 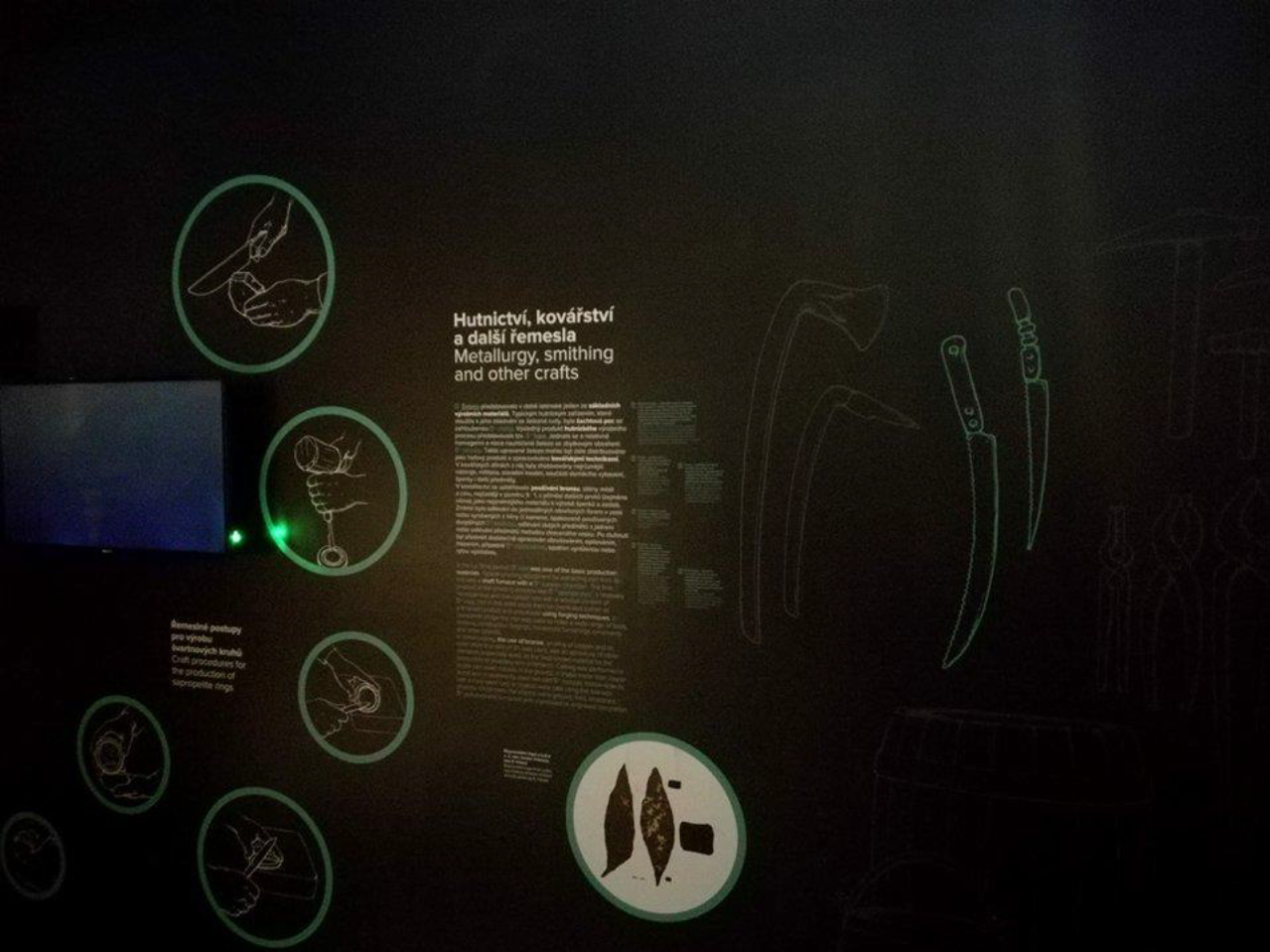 Accessibility to publics with mobility limitations is generally respected, although there is a part where this is not fulfilled in its entirety. In the reconstruction of Naviny's man, the legends of the objects on the side of the shop window are not accessible, either because they are too far away or because they are small in size. 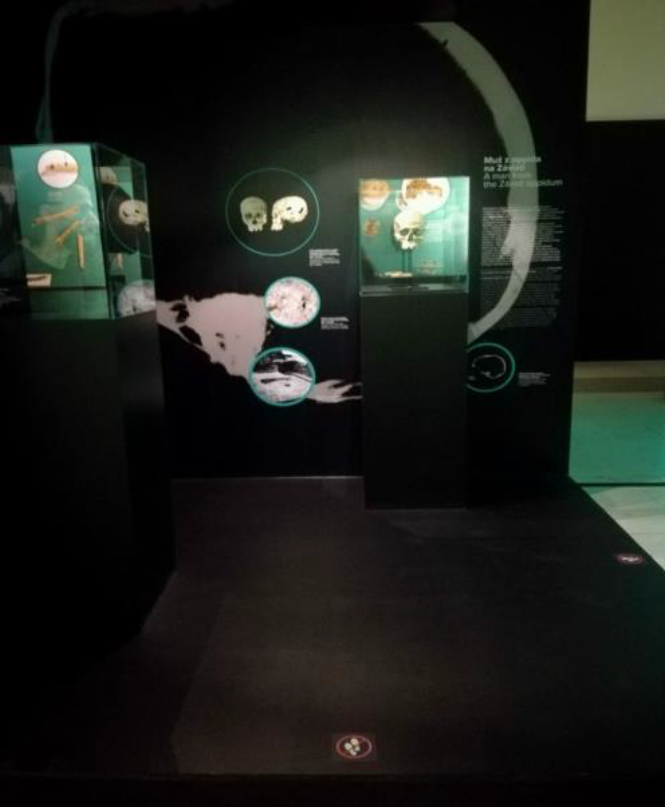 All tables are in transparent film with white letters under the windows. This solution does not make it easier to read, since the visitor, through both the light reflections and the bright background, is not allowed to do a "comfortable" reading, because he has to move constantly to be able to read in full what is written.

I imagine that when the subtitles were placed in this way they were trying not to cover the visibility of the pieces, however I think that in this way when solving a problem another one was created. 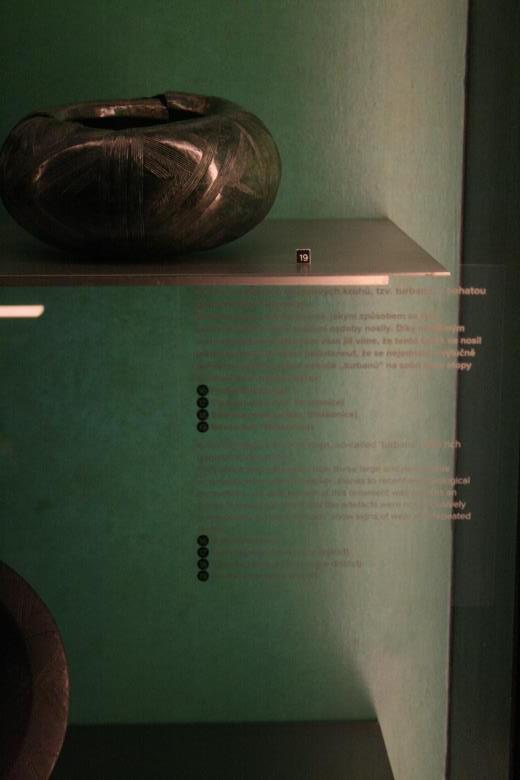 The expository communication of the exhibition was, in general, very good. It is capable of transmitting meanings and knowledge associated to a pedagogical aspect, promoting the assimilation of new

knowledge, associated with the technical research done over the years. In the presentation of different types of communication, such as texts, interactive activities, QR codes, information in brayle in one of the partes, it is promoted the inclusion of different audiences. Exposition scenography, together with the design itself, the use of color, light, text, associated with the chosen furniture, with the application of shop windows, which also reveals a precaution in terms of preventive conservation, make it a discourse coherent and articulate, which leads to a correct interpretation of the story that is intended to be told. An exhibition that, from my point of view, deserves to be visited.